The San Juan Basin offers many investment opportunities, as it contains the largest coal-bed methane field in the world and ranks second in total gas reserves. This spotlight provides geological facts, current activity and things to know beforehand.

The first oil well in the San Juan Basin spud in 1911, and since then over 40,000 wells have been drilled. Drilling activity was steady from the 1990s until 2008. In 2007, there were over 40 active rigs. Then attention turned to the prolific Marcellus, where gas could be extracted less expensively. In the past 12 months, 135 wells were completed in the Basin. The leading players include BP America, Hilcorp Energy Company, Catamount Energy Partners, and Encana Oil & Gas. 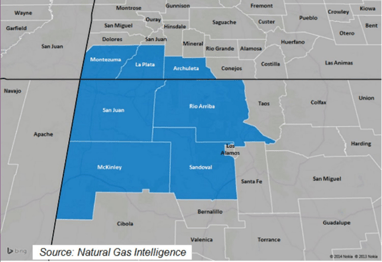 Improved drilling technology and renewed attention to the Mancos Shale and Gallup Sands are sparking increased interest in this area. The Mancos Shale lies under the Mesaverde and runs north to south, primarily covering areas of northwestern New Mexico into southwestern Colorado. While it is primarily a gas play, it becomes more oil prone as it moves south of the San Juan Basin. Its thickness is estimated to be almost 4,000 feet in places, with at least five continuous assessment units (per the USGS).

The following highlights are worth bearing in mind from an investment perspective:

In addition, private equity funding ramped up in 2017 with some of the biggest names investing:

What newcomers should know

Despite increased activity in the San Juan Basin, the time to obtain drilling permit approval can be lengthy due to the BLM process. One must also take into consideration that the basin is made up of large areas of federal, state and Indian lands. Furthermore, environmental groups are also very active there, so public relations is a must and has to be factored into the cost of developing the acreage. Finally, fee title in this area is often complex, with vintage vertical wells holding fee acreage for decades and convoluted heirship needing to be sorted out. Cinco's land management experts can help you navigate these nuanced situations.

For questions regarding mineral title matters or acquisitions in this area, please contact us.