Press enter to begin your search

Many landmen, companies and operators mistakenly assume that the application of oil and gas law is the same throughout all of the United States but when buying leases or researching title, it is extremely important to understand that every state has its own idiosyncrasies.  Pennsylvania is no exception, with relatively modern technical legislation and regulation, a backlog of pending litigation and existing precedent on many issues Pennsylvania is at odds with the law of most modern producing states.  Pennsylvanian law is full of potential leasing and title pitfalls, this article will discuss three such oddities: the Dunham rule, the apportionment rule, and how seated vs. unseated land affects title washing. 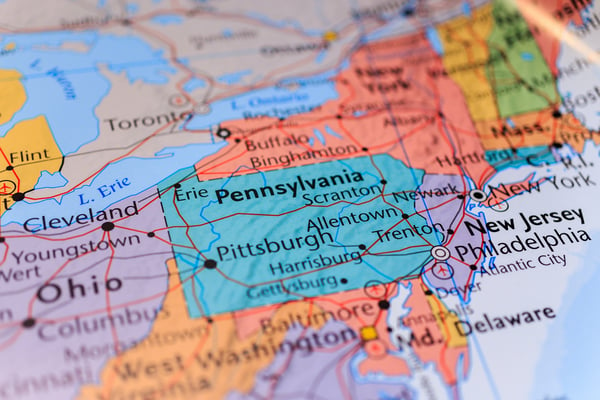 In Pennsylvania the “Dunham Rule” governs that for the purposes of a conveyance between private parties the use of the term “minerals” excludes oil and natural gas. Dunham & Shortt v. Kirkpatrick, 101 Pa. St. 36 (1882). Dunham asserts that the conveyance language must expressly state that oil and gas are to be reserved from the transfer unless clear and convincing evidence can be shown that the parties intended otherwise at the time of conveyance. This principle has been challenged in the courts. However in 2013, the Pennsylvania Supreme Court issued a decision in Butler v. Charles Powers Estate, No. 27 MAP 2012, 2013 Pa. LEXIS 789 (Pa. April 24, 2013) that reaffirmed the long standing presumption holding that natural gas is not a mineral for the purposes of private deeds unless there is clear evidence to the contrary.

Pennsylvania is an apportionment state. Apportionment is a minority doctrine that royalties accrued under an oil-and-gas lease on land that is subdivided during the lease term must be shared by the landowners in proportion to their interests in the land. (“Apportionment Rule [Oil and Gas] Law & Legal Definition.” N.p., 2001. Web. Retrieved from http://definitions.uslegal.com). In Wettengel v. Gormley, 28 A.934 (1894), reh’g, 39 A. 57 (Pa. 1898), James Gormley owned a farm containing a total of 600 acres of land; he executed an oil and gas lease on his property. James Gormley died on October 1, 1890. In accordance with the terms of his will, Gormley divided his property more or less equally into three tracts between his three children James T. Gormley, Anna B. Gormley and Maria J. Gormley. His heirs took title subject to the provisions of the oil and gas lease. James T. received royalty payments from the oil produced by six wells placed on his property by the lessee. The plaintiffs Anna B. and the heirs of Maria J. wanted James T. to pay a pro rata share of the proceeds based upon their ownership in the acreage of the three farms. James T. claimed he was entitled to all of the royalties because all of the producing wells were on his property. The question before the court was whether a portion of the royalties was owed to the other landowners of the 600-acre leasehold when the producing wells were located only on James T’s subdivided property. The court held that each party was entitled to receive a share of the royalty that corresponded to the interest they held in the land as a whole tract, no matter which portion of the original leasehold the wells were located upon. (Cassidy, Sean (2009). “Division of Royalties – Who Gets What?” 30 Energy & Min. L. Inst. 12)

Throughout Pennsylvania, real property was historically assessed and divided into two distinct classes: seated and unseated land. “Seated” land was applied to land that was improved upon through building, cultivation or otherwise. “Unseated” land referred to unimproved or wild land, typically unimproved forest land. (Adams Jr., J. W., Weiss, H. & Wilkinson III, J.C. (2012). Pennsylvania Oil and Gas Law and Practice. Philadelphia, PA: George T. Bisel Company, Inc.) For unseated lands there is a unique principle of Pennsylvania oil and gas law that applies to the severance of oil and gas interests called “title washing”. If oil and gas rights are severed under a parcel of land and were not separately assessed for taxes, should the surface owner default on their taxes and the default result in a subsequent tax sale, the oil and gas ownership would merge back into the surface title essentially “washing” the severance. Therefore, a buyer at a tax sale would receive the surface ownership as well as the oil and gas rights, even if they were previously recorded as severed.

This principle was recently upheld by the courts in Herder Spring Hunting Club v. Keller, 2014 Pa. Super. 100, No. 718 MDA 2013 (Pa. Super. May 9, 2014). The issue before the court was to determine who owned the oil and gas rights to a 460-acre parcel of land. Herder Spring Hunting Club was the clear surface owner having acquired the property in 1959 and in 2008 they sued the Keller family to quiet title to the subsurface rights. The Keller’s in 1899 had conveyed the surface rights while reserving the oil and gas. The court held that the Keller family, having severed the oil and gas, had an affirmative duty to notify the county assessor, allowing for the independent assessment of the oil and gas. In this case, there was no evidence that the Keller family ever notified the assessor or that the oil and gas had been assessed independently. Therefore a tax sale in 1941 by the County Commissioners extinguished the Keller’s reservation and rejoined the oil and gas rights with and the surface estate. (Vennum, M.K & Hackley, G. H. (13 May 2014). “Pennsylvania Superior Court Reaffirms Title Washing”. Retrieved from http://www.burlesonllp.com) While title washing is not legal in practice today, there has been considerable debate on the subject and its historical effects on over 150 hundred years of title.

Many experienced title and leasing agents have failed to account for Pennsylvania’s oil and gas differences when working in the state and as such have failed to lease the correct land owner or have provided incomplete title to their client.  At Cinco with offices in every major play throughout the US we can avoid these common pitfalls and provide the most up-to-date experience and knowledge for your company.

Written by:  Jessica Steely, LLB Hons, Regional Land Supervisor, Appalachian Office.  Before working with Cinco, Jessica worked as a Landman, focusing in multiple counties in Pennsylvania and Ohio. Ms. Steely holds an LLB, the English equivalent of a JD from the University of Lincoln School of Law, located in Lincoln, England.   She also completed several law clerk/internships in Dallas and Corsicana, TX as well as in the United Kingdom. She is a current member of the AAPL, YPE, YPWE and MLBC.

For further reading, we suggest the following resources:

We will send you an email whenever a new blog posting has been published.